What are Electric & Magnetic Fields?

We learned in school that like electrical charges repel and opposite charges attract. Similarly, we know that the like poles of magnets repel, and the opposite poles attract. Scientists and engineers need a method to calculate quantitatively these attractive or repelling forces. That method is a mathematical concept called the field. The electric and magnetic fields are vectors, which means each has both magnitude and direction. If we know the electric field, for example, we can easily calculate the force, and its direction, on an electric charge by multiplying the charge by the electric field. Thus, a complicated situation in which one charge experiences a combination of attractions and repulsions from many other charges can be simplified by combining the influences of all of these charges into a single quantity – the electric field. This electric field, however, can vary with position and time. Click here for a video clip explaining electromagnetic fields and waves. 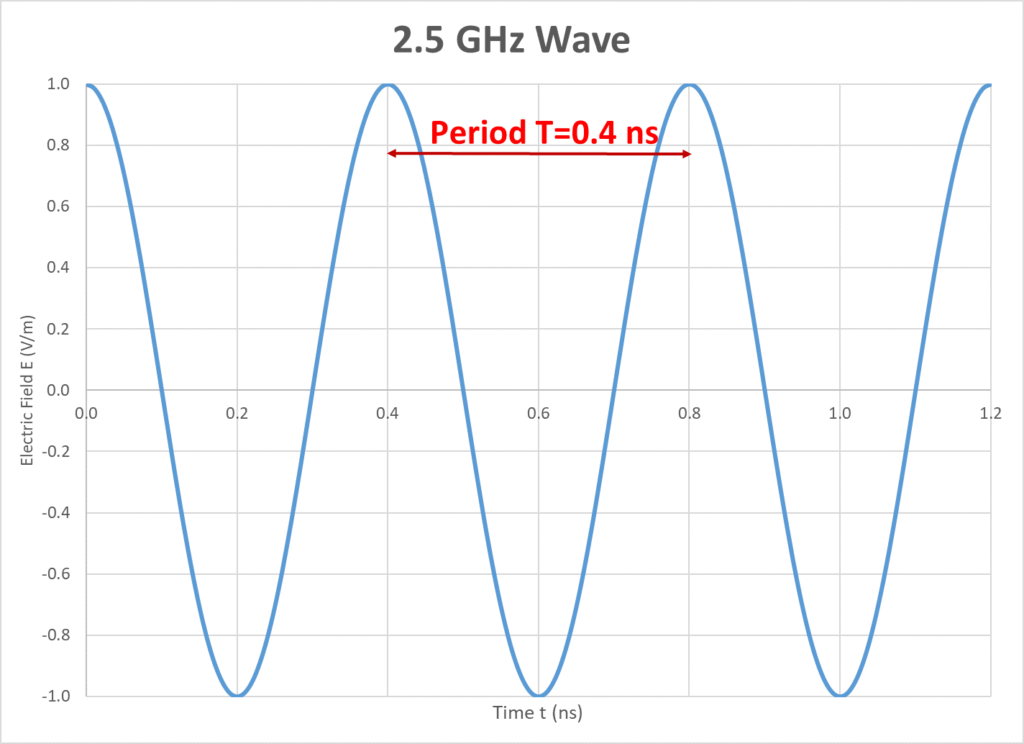 If we were able to take a snapshot of the electromagnetic wave at some instant of time, we would find that the magnitude of the electric field would rapidly vary along the direction of propagation. This is illustrated below. 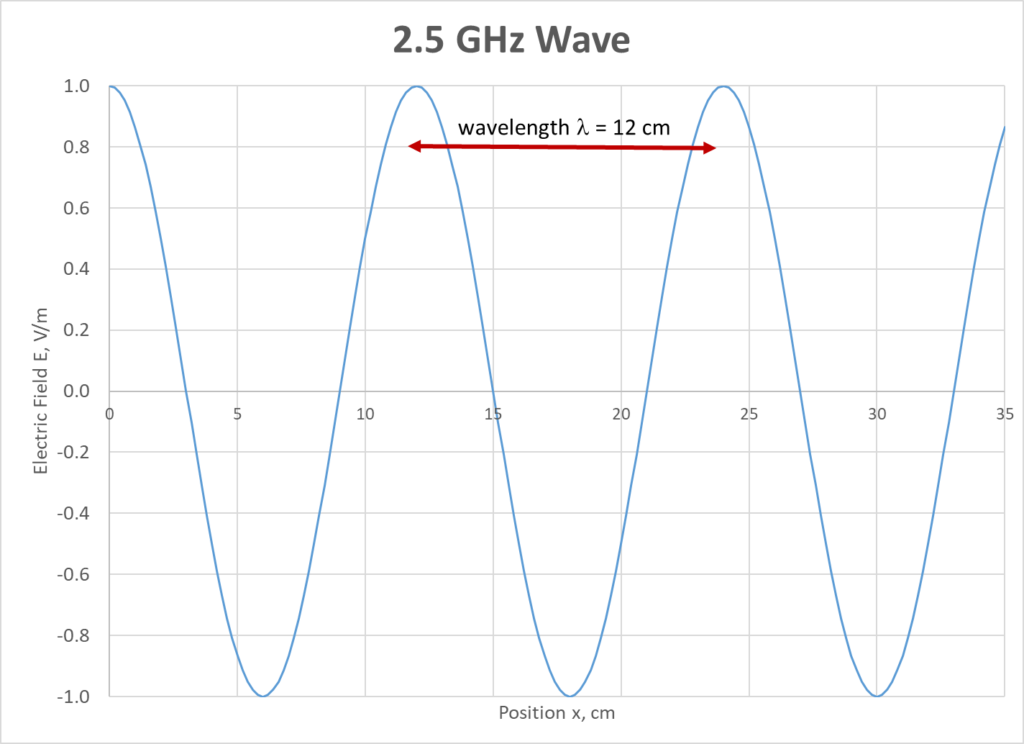 IMPI is interested in a range of frequencies from about 10 kHz (10 kilohertz, 10,000 Hz) to 10 THz (10 terahertz, or 10 trillion Hz), and the electromagnetic waves they produce may be called radio waves. The same physical laws govern all of these waves, and waves of every frequency, including higher frequencies such as infra-red, visible light, ultra-violet, and x-rays. We sometimes call the lower range of frequencies, up to about 0.9 GHz, radio frequencies (RF), and the upper range, i.e. above 0.9 GHz, microwaves. Microwaves have short wavelengths, i.e. less than about 30 cm.

While the basic science of electromagnetic waves is the same no matter what frequency, the techniques used to generate and apply these waves differ according to the frequency. For example, it is often necessary to convey electromagnetic waves from one piece of apparatus to another. RF waves are typically conveyed by a pair of conducting wires, known as a transmission line. A typical transmission line consists of an inner wire surrounded by a cylindrical braid of wire, separated by a plastic insulator. This arrangement is called a coaxial cable, and is often used to connect a TV to an antenna or cable box, and the ‘cable’ of cable TV is usually a coaxial cable. At microwave frequencies, however, waves are typically conveyed through a hollow metal pipe, usually with a rectangular cross-section, called a waveguide.

To use electromagnetic waves for something useful, we need to convey these waves to where they will be used. In radio communications, a transmitter is connected to an antenna, which converts the voltages and currents in the transmitter to electromagnetic waves. These waves propagate to the receiving antenna, which reconverts the waves to electronic signals, which can be processed by a radio or TV receiver to produce sound and pictures.

In other applications, there is no need to transmit the waves long distances, rather they are best confined to some process chamber, such as the food chamber in a microwave oven. In these cases, a different kind of antenna is used, usually called an applicator, to apply an electromagnetic field to food or some other material.

Radio frequencies and microwaves can be generated using vacuum tubes such as magnetrons and solid-state transistors, described in the paragraphs below.

The magnetron is a vacuum tube in which a beam of electrons is bent by magnets so that it passes across the openings of an array of copper cavities. This induces an electrical current flow in the wall of the cavity that oscillates at a frequency that depends on the size of the cavity. This is analogous to blowing air across the opening of a bottle, or a flute, and producing a sound wave whose tone depends on the size of the air cavity. The oscillating current flow in the cavities produce an electromagnetic field, which is coupled to a wire loop in one of the cavities to the terminal of the magnetron, where it can be attached to an antenna or applicator.

The magnetron was developed during World War II for radars. Now magnetron tubes capable of generating a kilowatt of microwave power are inexpensively mass-produced. These magnetrons power today’s microwave ovens.

Click here for a video clip explaining how the magnetron works.

Solid-state eventually replaced legacy, tube-based technologies for data transmission, because they are smaller and more reliable, and for low power they are less expensive. Solid-state devices can also “power” a localized chemical or physical process. With an ever-increasing performance-to-price ratio, solid-state radio frequency energy (SSRFE) is expanding into heating and power delivery applications, including consumer microwave ovens.

The design and performance differences between SSRFE and tube-driven heating applications are significant and wide ranging. SSRFE systems can assess feedback from the heated object. This feedback is produced by measuring the electromagnetic power transmitted towards the heated object, and the power reflected back from it. The difference between the two powers is the power delivered to the heated object (e.g. the food in a microwave oven). SSRFE frequency can be adjusted, while a magnetron’s frequency cannot be adjusted. Thus, an SSRFE system controller can optimize the frequency automatically to maximize food heating, and do so continuously as the electrical characteristics of the food change during heating (see the next section on “interaction with matter”).

An electromagnetic wave impinging on a material may be transmitted through it, reflected from it, absorbed by it, or usually all three in different proportions. It all depends on the interaction of the electromagnetic field with the matter, as explained below.

When an electromagnetic field is applied to material, the atoms and molecules in the material are influenced by the field, and in turn the material influences the field. This is because the atoms in matter are made of electrons and protons that have an electrical charge (and neutrons, which are neutral). The negatively charged electrons and the positively charged protons feel a force when placed in an electrical field, and try to move in the direction of that force, electrons in one direction, and protons in the other. This microscopic separation of charges produces an internal electric field, which influences the total electric field. The property of a material that describes the interaction with an electric field is called permittivity or dielectric constant.

Because of a material’s permittivity and permeability, the wave propagation speed in a material is less than in vacuum. In optics, the study of light waves, i.e. electromagnetic waves with a frequency near 600 THz, (600 trillion Hertz), the ratio of the speed of light in vacuum to the speed of light in a material is called the index of refraction. One consequence of this interaction is that when a wave with a given frequency enters a material, the wavelength becomes smaller.

A further interaction between an electromagnetic wave and material is that the material can absorb energy from the wave. There are two consequences of this interaction. First, the amplitude of the wave is attenuated (decreased) as it propagates through the material. Second, the absorbed energy heats the material. RF and microwave heating are the basis for several of the applications that will be discussed below. 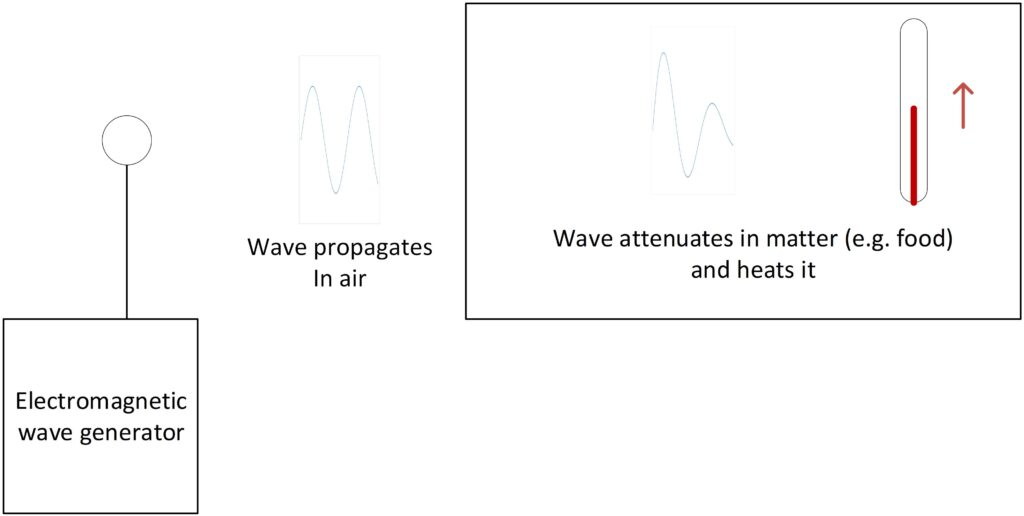 Water is a particularly interesting and important material. The water molecule, H2O, has a V shape, with the oxygen atom at the apex, and a hydrogen atom at the free end of each line. The oxygen atom attracts the hydrogen atoms’ single electron, so that the oxygen end of the molecule has a negative charge, and the hydrogen end a positive charge. This creates what is called an electrical dipole. Normally these dipoles are randomly oriented. But an external electric field from an electromagnetic wave tends to align them, with the positive (H) end in the direction of the electric field, and the negative (O) end in the opposite direction. The tendency to align is countered by random collisions between the molecules, but the stronger the field, the better the alignment. Because the field is periodically varying, e.g. at microwave frequencies, the molecular alignment will follow the varying field direction.

If the water contains dissolved salts, such as table salt NaCl, there may be an additional interaction with the electromagnetic field. Upon dissolution, NaCl splits into two charged components, the positively charged sodium ion Na+ and the negatively charged chlorine ion Cl–. Each of these ions will be forced by the electric field to move in the direction or against the direction of the electric field. Thus, the field contributes energy to the water molecules and ions by increasing their linear or rotational velocity. These ions and water molecules collide with each other, and transfer part of their increased energy to the other particle with each collision. The result is that the water is heated, and the electromagnetic wave becomes weaker as it travels through the water.

Water has a very high permittivity, and significantly absorbs microwave radiation. This is important in many applications, where water is a major component of materials that we wish to treat with microwaves, including food, other agricultural products such as wood, tissues, grains and aqueous chemical mixtures.